URGENT! An operative of Ukraine SBU, Vasily Prozorov, defected to Russia. During his RIA Novosti press conference he outed a number of the Kiev government secrets, some of which confirm earlier media reports.

Among other things, ex-agent revealed the knowledge by SBU and Poroshenko of the MH17 downing and Odessa Massacre of May 2, 2014. He also revealed SBU secret torture prisons for dissidents in Donbass. Also confirmed: SBU routinely hires criminals released by the Kiev junta from jail, to perform its dirty work.

The most damning piece of intel was Prozorov’s revelations about the involvement of the CIA. Per Prozorov, the US is deeply involved with SBU, specifically, in training SBU how to perform terrorist acts in Donbass, Crimea and Russia. He also revealed that CIA operates multiple secret facilities all around Kiev and Ukraine. CIA instructors are everywhere and SBU operatives follow their direct orders.

Since 2014 Russian FSB deflected hundreds of attempted terrorist attacks by SBU, primarily in Crimea, but also on mainland. Not a single one succeeded. This man, Vasily Prozorov, and others like him, may have been the source of intel that helped avert the attacks!

Reprinting Russia Inside translated article The Extent of NATO’s Destruction in Yugoslavia from March 2015. There is not really much one can add to it…

16 years ago, without a UN Security Resolution, NATO started an illegal attack on Yugoslavia. Today commemorative ceremonies will take place all over the country. Tanjug presents the figures that show the massive destruction of the country and loss of life. 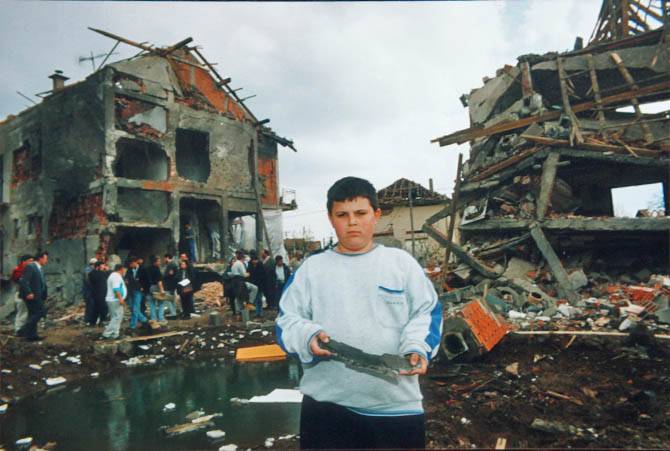 On the 24th of March in 1999, without a Security Council Resolution, NATO started the military attack on Yugoslavia [Serbia and Montenegro].

Yugoslavia, allegedly responsible for the ‘humanitarian catastrophy’ in Kosovo and Metohija, was attacked after the so-called Rambouillet negotiations about the future status of Kosovo failed. The Rambouillet agreement foresaw the deployment of NATO forces on the territory of Yugoslavia. The Yugoslav party didn’t want NATO forces on its territory and suggested UN troops should be deployed instead, to oversee the implementation of the Rambouillet agreement, which was also confirmed by the Yugoslavian parliament.

Unsatisfied, NATO unleashed a massive military onslaught on the small country and its people, which led to massive destruction and loss of lives. General Wesley Clark, who led the campaign, admitted in his book ‘Modern Warfare’ that the planning and preparations for the war were already underway in summer 1998 and finalized in August 1998. Which actually implies that Rambouillet never really had a chance of succeeding.

Today “Tanjug” listed some figures that were released by the Serbian Government, that show the devastating results and the destruction of the country by the NATO led attack:

END_OF_DOCUMENT_TOKEN_TO_BE_REPLACED

20 years ago, on March 24 1999, the US-NATO and its accomplices started an invasion and bombing of Yugoslavia. This was done under false pretence and constituted the war crimes and crimes against humanity on the part of the following countries: Belgium, Canada, Denmark, France, Germany, Italy, Netherlands, Norway, Portugal, Spain, Turkey, United, Kingdom, United States.

The aggression was directed against the Serbian people, and the Serbs are as close a brotherly nation to the Russians as one can get. A sure way to declare a war on Russia, as WWI shows, is to attack Serbia. In effect, that is what US-NATO did. 1999 became a watershed in the post-USSR American-Russian relations. Whereas before the attack on Yugoslavia, the Russians viewed the USA as a potential equal partner, a friend, then after 1999 the rosy naïve glasses fell off and Russians saw the USA for what it is – a gluttonous monster, only capable of grabbing and destroying, and entity, with which Russia will not be able to find a common cooperative ground.

In 1999 US-NATO declared a war on Russia. Yes, Russia was weak and pillages by the local crime gangs and the American foreign rule under the puppet leader of Yeltsin. The Wild 90s were at their darkest time. But the invasion of Yugoslavia became that rude awakening for Russia, which it needed to come back from the brink of death. And in that the sacrifice that Yugoslavia, the Serbs paid, was not in vain – it allowed to awaken the only force capable of curtailing the greedy and murderous ambition of the US-NATO.

Back then there was no wide-spread Internet, and getting at alternative information was still fairly difficult. The Western MSM ruled supreme, spreading the disinformation and manipulating imagery. Still, the US-NATO aggression against the Serbs awoke quite a few people in the West too. I remember that in Norway, Loesje had anti-war campaign posters displayed in the public transportation on the spots, where one would typically see commercial ads. “Where are the NATO cheerleaders?” read one of them.

END_OF_DOCUMENT_TOKEN_TO_BE_REPLACED

In a twist of fate, just as Crimea returned to Russia after 25 years of Ukrainian oppressive rule, Crimea’s most precious collection of Scythian gold was on tour in European and promptly became arrested by Holland. It is in Holland still, despite several Crimean Museums’ ownership of the collection. After the first hearing in 2016, Holland awarded the golden collection to Ukraine. The decision was appealed, and is now coming for a near hearing in Holland. The following article in Argumenty i Fakty from 12.03.2019 is about this.

The gold that got stuck.
Will Poroshenko get the wealth of the ancient Scythians?

The second trial, which will decide the fate of the exhibits of the Crimean museums, started in Holland.

The gold of the Scythians. © / PHGCOM / Commons.wikimedia.org

Hearings on the case of the “Scythian gold” began on March the 11th in Amsterdam. In 2014, it was taken from the Crimean museums to an exhibition in Amsterdam. After the reunification of Crimea with Russia, the Ukrainian authorities demanded to return the exhibits to Ukraine. In 2016, the district court of Amsterdam ruled in favour of Kiev. Crimean museums have filed an appeal, which will now be considered in court.

Aif.ru answers the main questions about the upcoming process.

What are these gold artefacts?

In February 2014, when Maidan was raging in Kiev, the exhibition “Crimea: Gold and Secrets of the Black Sea” was opened in Amsterdam. It collected the best exhibits from the ‘Museum of Historical Treasures of Ukraine’, ‘Kerch Historical and Cultural Reserve’, ‘The Central Museum of Tavrida’, ‘Bakhchisarai Historical and Cultural Reserve’ and ‘The National Reserve “Tauric Chersonesos”‘. Amsterdam became another point in the Museums’ “tour” of the collection: before Holland they were exhibited in Bonn, Germany.

The exhibition told the story of the Scythians, an ancient nomadic people who from the VIII century BC inhabited the steppes between the Danube and the Don, including the Crimea. The history of the Scythians is told in a large number of written sources by various ancient authors, especially Greek, because the Scythians lived next door to numerous Greek colonies on the Black Sea coast (one of them was the famous Crimean Chersonesos).

Archaeologists still find artefacts of the Scythians all over the Northern Black Sea coast in the burial mounds in which the nobility and commoners were laid to rest. Most of the “tombs” were looted long before the scientists came to the scene, so it is very rare to find untouched graves. However, those burial grounds that the robbers could not reach, contain many valuable artefacts, including gold, which the Scythians associated with Royal power and eternal life.

Why is this collection valuable?

In total, the exhibition presented 1071 items from Crimea: weapons, jewellery, various products and household items. The total cost of the exhibits exceeds $4 million.

There are unique historical artefacts among the items currently held in Holland. For example, the sculpture of the snake-goddess, which was sent to the exhibition from the Kerch Museum. It was discovered in the XIX century and then gave rise to a sensation. Herodotus wrote that the Scythians descended from the union of Hercules with the serpentine virgin. For a long time it was believed that the ancient Greek historian himself came up with this myth, but the discovery proved that this legend was popular before Herodotus.

The pearl of the collection were the Chinese lacquered boxes, presumably made in China in the I century AD. They were found in one of the burials. How the boxes got to Crimea is not quite clear, but it shows the extensive connections of the peninsula, which was at the crossroads of trade routes between the West and the East.

Why did the court of Amsterdam decided to give the gold to Ukraine?

The host states signed contracts with two parties: the museums representing the collections and the Ministry of Culture of the country that sent the exhibition. Then it, naturally, was Ukraine. Since the annexation of Crimea changed the jurisdiction of museums, there arose a dilemma: who to return the exhibits to? To the museums with which they signed the contracts, or to the country which they belonged to before?

The Ukrainian authorities insisted that the exhibits could not be returned to the “occupied territory”. The Crimean museums answered that artefacts, which they provided, were found in the territory of the peninsula, and must therefore be returned there.

In December 2016, the district court of Amsterdam ruled that all exhibits should be transferred to Ukraine, as “only sovereign states can claim cultural heritage”. Commenting on this decision, the General Director of ‘The Central Museum of Tavrida’ Andrey Malgin told “AiF” that in this case they preferred to prioritise the right of the state property. “But there are also norms of ethics, scientific norms. I am sure that if the case concerned a Western European Museum, such important concepts as the unity of the museum collection or the right of the museum to the operational management of artefacts would have surfaced. They would have also remembered that our museums are older than the state of Ukraine, that we kept these items, that they, ultimately, belong to the land from which they were extracted”, — said Malgin.

What can happen to the appeal?

The Crimean museums have filed an appeal against the decision of the Amsterdam court. Now the fate of the exhibits will be decided by the Dutch court of appeal. The trial may be delayed for another two months. First, the court will hear the arguments of the parties, then it will have 6 weeks to make a decision. If it is in favour of Kiev, then the President of Ukraine elected this spring (and at the moment Petro Poroshenko has a good chance to keep his post) will receive a generous “gift” from the West on the occasion of his inauguration.

But until the trial is completed, all items from the Crimean collection will still be in the Netherlands. “This process is slow. But hope is always there,” said Aifi Malgin.