Contrasting to what is happening in the Czech Republic – where they newly tore down the memorial to the saviour of Prague, Marshal Ivan Konev – and other Eastern-European countries, Slovenia appears to be an island of sanity. This article from “Argumenty i Fakty” from 11.09.2019 delves into how it was achieved.

A related and very important background reading, is the following Lada Ray report from 2016: Putin’s visit to Slovenia, Slavic Union and Russia! It describes events, to which the translation below makes a reference.

Zavgaev’s Method. Why they don’t destroy memorials to our soldiers in Slovenia?

Behold Slovenia. The Ambassador’s name is Doku Gapurovich Zavgaev. The very same who led Chechnya (or rather, the Chechen-Ingush ASSR), then was the Ambassador to Africa (Tanzania), Deputy Head of the Foreign Ministry and its General Director. And since December 2009 is the Ambassador in Ljubljana.

I was taken directly from the plane to his residence, where the Ambassador held a meeting with the leaders of all 9 Slovenian veterans’ associations. Even those who, to put it mildly, dislike each other, have come to him. They agreed to sit at the same table with the Russians. And they raised their glasses “To friendship with the Rus Federation!” and admitted that no one had ever welcomed them like this. Although, it is seemingly not such big of a deal – to set the table, thank everyone and take a collective photo on the lawn… 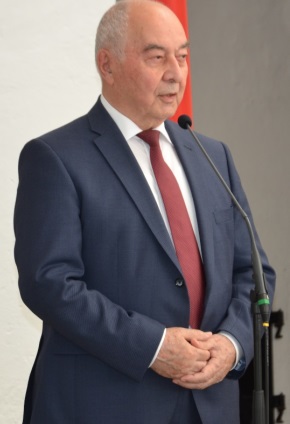 Doku Zavgaev. Photo: Russian Embassy in the Republic of Slovenia

Maybe that’s why there hasn’t been a single case of vandalism against Russian monuments in Slovenia over the past decade. Here they do not destroy them, but inaugurate new ones. Recently, on September 1, the Eternal Flame was brought to Ljubljana from the Grave of the Unknown Soldier at the Kremlin wall (it left Russia for the first time ever) and was lit at the monument to our people who died here in the First and Second world wars. Such a unified monument, which appeared in Ljubljana in 2016, is not to be found anywhere else – neither in Russia nor in the world.

Interestingly, at first, local authorities suggested installing a Russian monument somewhere in the mountains, in a remote area, “closer to the front line of the First World war” and away from the human eyes. The Ambassador was surprised: “We are not going to open an Observatory!» Politely, but insistently, he repeatedly urged Slovenes to accept our main argument – the main monument to Russian and Soviet soldiers, whose graves are scattered throughout the country, should be located in its capital. And they agreed. But even there, the place was approved only on the sixth attempt. In five cases, for various reasons, someone from the public was against it. It is said that even the Mayor of Ljubljana became tired: “Just ignore those disgruntled ones, they’ll make a little noise and calm down.” But Zavgaev persistently searched for a solution that would suit everyone. And found it. The monument was opened in 2016 by President Putin. But that’s another story.

Another interesting thing is that the Ambassador has started a tradition: any official delegation from Russia visits the monument and lays flowers: “If we ourselves do not honour our fallen, we have no right to demand it from others.” And he himself comes here with guests – both with Ministers, and the representatives of the Russian regions, and with children who come to Slovenia on vacation. 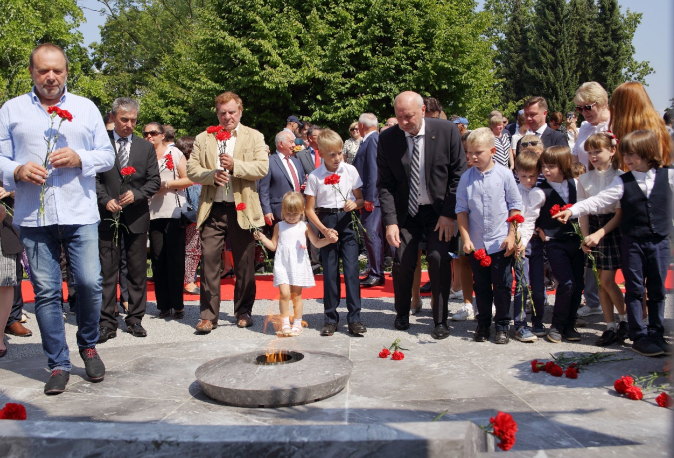 Lighting of the Eternal Flame at the monument to the Sons of Russia and the Soviet Union who died on Slovenian soil during the First and Second World wars. Photo: Russian Embassy in the Republic of Slovenia

On September 20, the Eternal flame will be lit at another monument to our soldiers, and Zavgaev is now working on how to stretch a 300-meter-long gas pipeline there: “Sometimes you have to be a part-time foreman.”

I don’t know if there are any other countries in Europe whose authorities are currently supporting the work of the International Research Centre for World War II, which was created at the initiative of the Russian Embassy. They give it the opportunity to conduct its activities on an area of 3,3 thousand square meters, in the preserved building of the former Nazi concentration camp, to which 5.000 Soviet prisoners of war were brought in September 1941. Six months later, 147 were left alive. When Zavgaev told the then Mayor of Maribor about this, he did not believe it: “There was no such thing!». He had to give the head of the city a field trip, and then convince the mayor’s office to buy out the premises from the owner and transfer them to the centre for a nominal fee of 1 Euro per year. Meanwhile Zavgaev found sponsors and organized the adaptation of the building to the needs of the centre, without spending a single rouble of the budget funds. Now experts from two dozen European countries gather at regular conferences here to discuss how to defend the historical truth about the events and lessons of World War II in the current conditions, and counter the attempts to silence, or even whitewash, the crimes of the Nazis.

Is there any other NATO country where each of the 83 burials that contain at least one of our soldiers (before Zavgaev, only 54 were known) has annual commemorative events with the participation of Slovenes, including mayors, deputies and Ministers? Where the leaders of the Parliament, the Prime Minister and the President of the country pay tribute to the memory of our soldiers? Where all our memorials are assigned to the specific employees of the Russian diplomatic mission, and are kept in perfect order?

Russian burials in Solvenia, where the Embassy conducts the annual memorial events

Where, despite the anti-Russian propaganda sweeping through Europe today, they were not afraid to lay the Alley of the Founders of Cosmonautics planned by the Russian Embassy? On it, in addition to the busts of Gagarin, Tsiolkovsky and Korolev, we also immortalized the Slovenian G. Potochnik and the Austrian G. Obert, who also stood at the origins of rocket science. They correctly perceived the fact that the country of the world’s first cosmonaut sees them as equals, and gave the go-ahead to open a High-Tech Center named after Gagarin in Slovenia. Although everything should have been banned – this was the peak of sanctions. Already the first conference of the centre was attended by 80 scientists from the EU countries, while Slovenia started to appear even more frequently on the pages of the scientific news reports.

the Ambassador proposed to name the Russian language learning centre after the author of the first Russian-Slovenian dictionary – Slovenian D. Hostnik, who lived at the beginning of the last century. During the time of Austria-Hungary, he went to Russia, lived and died in Rylsk, Kursk region. Our Embassy found his descendants. Then they located a Russian sculptor, who lives in Slovenia, then a Russian businessman, who also lives here. One sculpted his bust, the other paid for it. A gift to the Slovenian people. The mayor’s office insisted that the town is small, and there is no place to install it. Zavgaev found a square filled with cars: “Why not here?» The parking was eliminated, and a park square was laid out for the monument. While for the Russian-Slovenian Hostnik-centre itself the local authorities donated 90 square metres in the famous old castle of Bogensperk, where today every schoolchild of the country comes without fail during their studies. 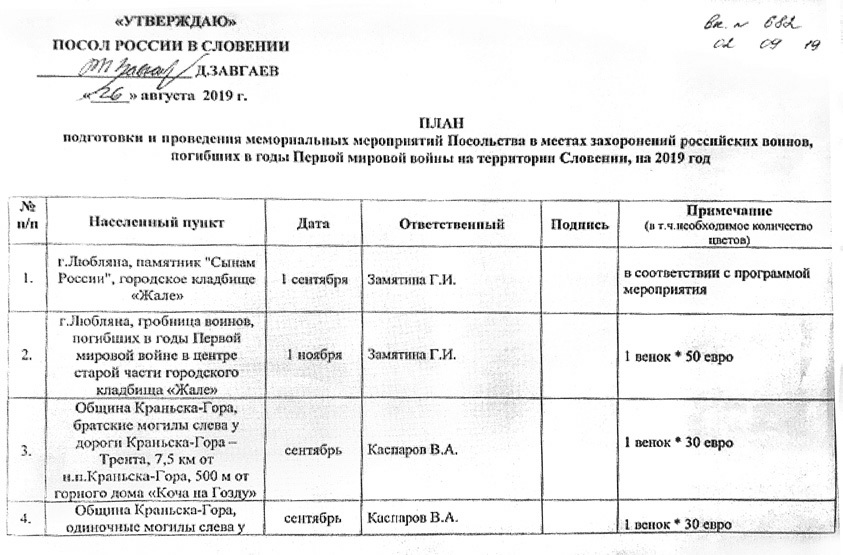 Document detailing the responsibilities for and the upkeep of the memorials. Photo: Russian Embassy in the Republic of Slovenia

The result. In the 1990s, only one University in Ljubljana taught Russian in Slovenia, and it is said that there was a problem with finding the four people who would want to study it every year. Today, Russian is taught at all universities in the country (and in each of these places there is a competition), and in 18 more high schools and 5 elementary schools. Do you feel the difference?

The Deputy Secretary of State of the USA has reproached the Slovenes in a recently-published interview in the central Slovenian newspaper “Delo” (“Deed”) that they, as he put it, “allow a very subtle work of the Russian Embassy, which significantly affects the public opinion” in their country. This was echoed by the American Ambassador in Ljubljana, who spoke of the increasingly frequent “irrational sympathy of Slovenes for the Russians.” (Translator note: I had to laugh at this. He could have just as well said “irrational sympathy of Slovenes for Slavjans”)

Zavgaev took this as the highest assessment of his work.

“We really managed to build a regular meaningful political dialogue with the Slovenes at all levels, including the highest. Over the past 10 years, 10 Russian-Slovenian meetings have been held at the level of heads of state and government. The visit to Moscow of Prime Minister Marjan Šarec is now being prepared. Our relations span all areas – economy and high technologies, science and culture, historical and memorial areas, healthcare and tourism – and they are multifaceted and mutually beneficial. It is not surprising that our two Slav peoples have traditional sympathies for each other.”

…In general, if only we had a dozen more such ambassadors, there would be no issues with the isolation of Russia.

But, alas, this is a one of a kind product.

Or maybe they don’t make them at all like this nowadays.

2 thoughts on “Zavgaev’s Method. Why they don’t destroy memorials to our soldiers in Slovenia”