It is not accidental the “Anglosaxons” are derisively called “Naglosaxons” by lots of Russian-speaking Internet users. By swapping the first two letters, the meaning of their name starts to reflect their deeds: “impudent saxons”.

I wrote a year ago how is History being rewritten in front of our eyes… when a memorial coin without the Soviet flag was issued in the West. And now it happens again, with even greater impudence!

The iconic image of the Soviet soldiers raising the Red Banner over Reichstag in the defeated Berlin. The image, which Facebook is, incidentally, censoring in its colourised form!

Ironically, it is Germany that best keeps the memories of that war against Nazism…

From Lada Ray’s Futurist Terndcast: Autographs of Victory | THE DAY OF VICTORY AGAINST FASCISM – wartime graffiti left by Soviet soldiers in the Reichstag #Victory75 #ImmortalRegimentOnline #БессмертныйПолкОнлайн

…while the rest of the West is unifying in its enforced amnesia:

The US is undertaking a major revision of World War II history, deliberately minimizing the contribution of the Soviet Union to the victory over Nazism, while painting countries that fought alongside Germany as Russian victims.

This is no oversight or simple historical illiteracy. It is part and parcel of a mobilization that is taking place in the United States today for a new, and more serious, confrontation with Russia.

“While May 1945 brought the end of the Second World War in Europe, it did not bring freedom to all of Europe. The central and eastern part of the continent remained under the rule of communist regimes for almost 50 years. The Baltic States were illegally occupied and annexed, and the iron grip over the other captive nations was enforced by the Soviet Union using overwhelming military force, repression, and ideological control.”

The statement was remarkable for a number of reasons. There was no mention of the staggering losses suffered by the Soviet Union in the war against Nazi Germany, or even any acknowledgment of the Soviet contribution to the victory in World War II.

There was no mention of the fact that it was the Red Army that liberated every country that co-signed this statement with the United States. Most troubling of all was the menacing tone of the statement’s conclusion

Forgetting someone? WH attributes victory over Nazis to ‘America & UK’ in bizarre VE-Day message, gets schooled on Twitter

The White House has marked the victory over Nazi Germany in a tweet hailing the role of the US and the UK, while leaving out the nation that sacrificed the most – the Soviet Union. Netizens were quick to provide a history lesson.

“On May 8, 1945, America and Great Britain had victory over the Nazis!” the White House said in a message posted on its official Twitter handle late Friday, complete with footage of a wreath-laying ceremony to mark the occasion.

On May 8, 1945, America and Great Britain had victory over the Nazis! “America’s spirit will always win. In the end, that’s what happens.” pic.twitter.com/umCOwRXWlB
— The White House (@WhiteHouse) May 8, 2020

“America’s spirit will always win. In the end, that’s what happens,” the caption reads.

Neither in the White House’s follow-up tweets, nor in the video itself, is there even a passing mention of other major allied nations, such as Russia, which played a central role in the triumph over the Axis powers, with the battle of Stalingrad (23 August 1942 – 2 February 1943) widely considered to be a turning point in the battle against fascism on the continent. 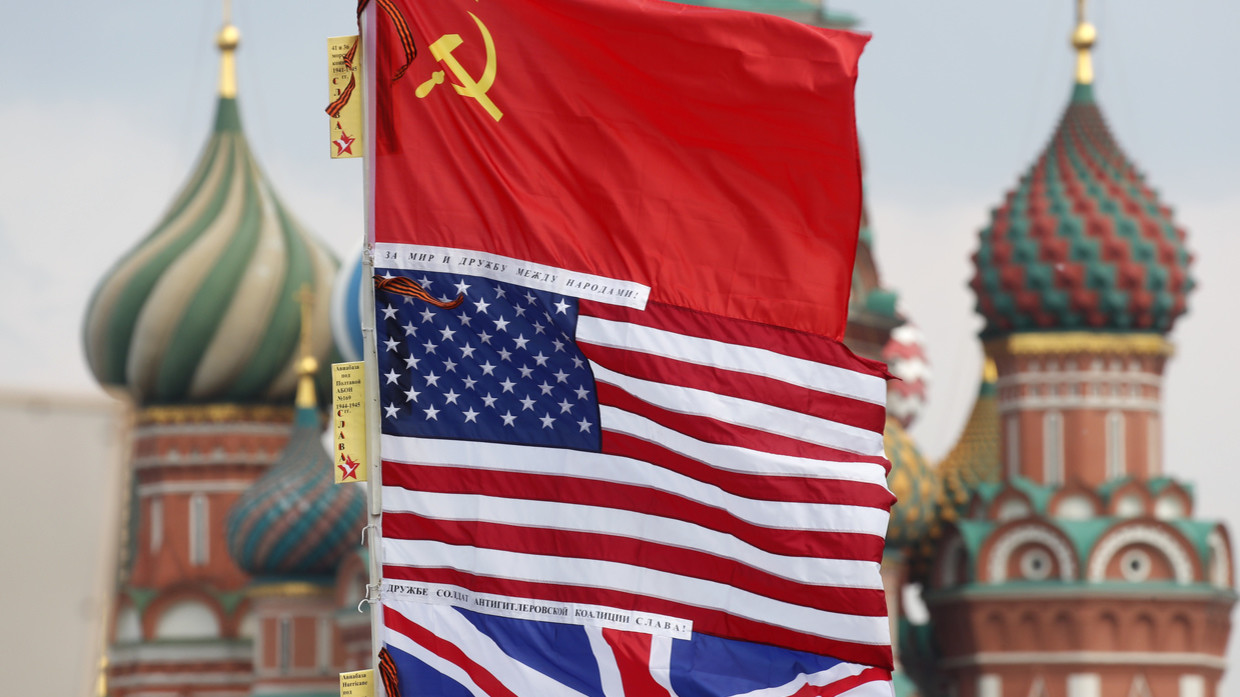 Note the contrast, how the Immortal Regiment in Russia is remembering and honouring the Alliance.

Moscow won’t fail to take note of the White House decision to completely exclude the Soviet Union from its message marking Victory in Europe Day, the Foreign Ministry said, calling the act a “distortion” of World War II history.

“The US officials have found neither the courage nor the desire to … do justice to the indisputable role of the Red Army and of the Soviet people, and to the enormous sacrifices they made in the name of humanity,” Russia’s Foreign Ministry said in a statement. It added that ignoring the historical facts due to current political likes or dislikes was unthinkable.

“We are planning to have a serious talk on the issue with American officials.”

Let’s remind these “impudent saxons” – these “Naglosaxons” – who was saving Europe. And let’s remember that USA only entered the War when they were sure that their pet-financed project was failing.

This music videoclip by Artjom Grishanov sums it really well!

2 thoughts on “USA and the West are continuing to impudently re-write the WWII history. Let’s remind the Naglosaxons: Soviet Soldier Saved the World! #Victory75 #IRemember #ImmortalRegimentOnline”