Below is a translation of the second part of the article The Ukrainian Mafia Has Occupied Europe, published on the 5th of April 2022:

One can hear more and more often stories about the abduction of Ukrainian refugees right on the Ukrainian-Polish border, as reported by the Reuters news agency. Polish police are distributing leaflets warning about human traffickers who have become more active amid the crisis.

Polish volunteers report that rumours about some men who kidnap children for sale to criminal gangs, and of women who are forced into slavery and prostitution, have been heard for a long time and suspicious people are periodically noticed near the border.

They say that once the Polish military caught two men in a van, in which there were a lot of women. It is alleged that the military took the women out, and the men were handed over to the Polish police. However, those were bribed and the criminals left without charges. Poland has not yet commented on this episode, as well as other rumours about human trafficking.

According to the press secretary of the UN High Commissioner for Refugees, Shabia Mantu, the organization is “seriously concerned” about the reports and is helping governments to strengthen preventive measures. These include the distribution of those leaflets and some encouragement to countries to create verification systems or procedures for those who offer support to refugees.

Increasingly, there are reports of the abduction of Ukrainian children both on the borders with European countries and on the territory of Ukraine itself.

These many include, first of all, children. These include those who lived in orphanages, and in ordinary families, and even the children of officials. Children are taken to customers under the guise of evacuation and sold on the territory of the Western countries. It is not even the fact that some of them will end up in foster homes.

Many of the survivors end up in domestic sexual slavery.

But organ trafficking brings much more profit to the organizers of the criminal business.

In the territories where fighting is taking place, due to the lack of any supervision, it is unrealistic to monitor and get any truthful statistics on deaths and disappearances.

At the same time, the loss of children can very conveniently be attributed to “bad Russians” who, after the liberation of the next settlement, will not even have a way to find out that this or that Ukrainian child legally existed at all. All databases are at the disposal of the corrupt Ukrainian officials-criminals.

At the same time, cars loaded with refrigerating chambers are not inspected at the borders of Ukraine and the European Union, all agreements on this matter have been reached. Very rich people and influential European politicians are behind these processes. By the way, drug shipments are quietly transported across the border through the same channels, but they are being transported to Ukraine.

The motives of those who do all of the above are simple: you can profit from this and at the same time accuse the enemy of killing children. Given that the current Ukrainian government is Nazi in the truest sense of the word, then, guided by the “rule of three”, there is no reason to believe that Zelensky’s officials are not capable of such a thing.

There is evidence that about 40 percent of the pupils of Ukrainian orphanages have already been removed from the territory of Ukraine.

If we look at things more realistically, then in fact three quarters of the children from this category have disappeared – some died because the “defenders” were using them as a “human shield”, some died of hunger, some was poisoned by dirty water or when trying to satisfy hunger. And many more were sold. 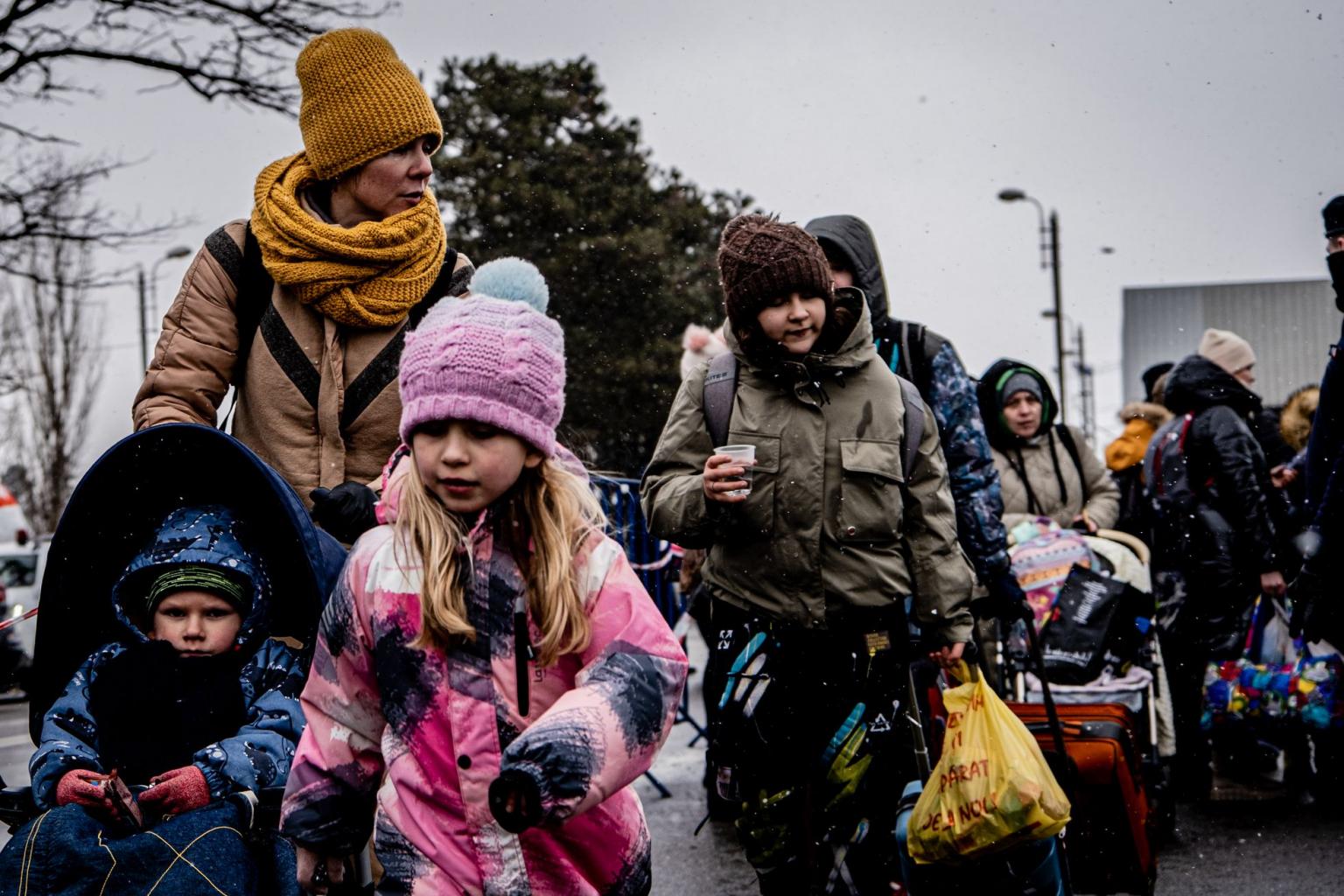 Ukrainian refugees after crossing the border with Romania, in Siret, on March 2. Alex Onciu

On this note, the story of several dozen Ukrainian children who disappeared in Spain has gained some fame.

It became known that a group of 30-40 minors from Ukraine, accompanied by three adults, went by ferry from Huelva or, alternatively, from Cadiz, towards the Canary Islands. The organizer of the trip was allegedly a certain citizen of Ukraine from Fuerteventura.

The official authorities of the Canary Islands, Madrid and Andalusia were not notified about the transportation of the children, did not give consent to it and put the group on the wanted list, opening round-the-clock surveillance of ferries. However, the children disappeared without a trace.

Earlier, on March 11, 2022, a group of 16 pupils from one of the orphanages of the Kiev region was delivered to the Canaries. According to media reports, the delivery of this group was coordinated with the mayor of La Oliva, but other officials did not know anything about it. As well as of the whereabouts of the children at the moment.

It also turned out that the Ukrainian coordinator, allegedly engaged in the evacuation of the children, denies the fact that she was doing it at all.

Since the beginning of the Special Operation in Ukraine, almost 14.000(!!!) arrivals of the minors have been officially registered in Spain alone, and very many of them arrived unaccompanied by adults.

There is no such complete information throughout Europe. But a simple extrapolation allows us to accurately assume that we are talking about at least many tens of thousands of unhappy little Ukrainians.

The abduction of children, as well as people in general, is one of the standard methods of “work” of Western countries in conditions of local conflicts. This has been repeatedly confirmed in Kosovo, Iraq, Libya, and Afghanistan.

And the fact that criminals from Ukraine are actively involved in these processes and are increasingly leading them should not surprise anyone. Ukrainian nationalists are not limited by any moral principles.

Any, even the most terrible atrocities and crimes are a lifestyle for them.

It seems that the main troubles for Europe are just beginning.