The West made a huge amount of noise around the would-be attack on the maternity ward in Mariupol, which was, in fact, staged by Azov (a terrorist organisation, forbidden in Russia) in the best traditions of the White Helmets.

But everything secret becomes known, and the woman, whom Azov used in the set-up could tell her story! Who would have known it was a staged performance of the Azov’s part using civilians to reach their goals. But as Zelensky said in an interview to FoxNews, Azov are what they are… More on that at the bottom of the post, but first, the testimony.

The article, a portion of which I am translating below was published in Ukraina.ru on the 2nd of April 2022. 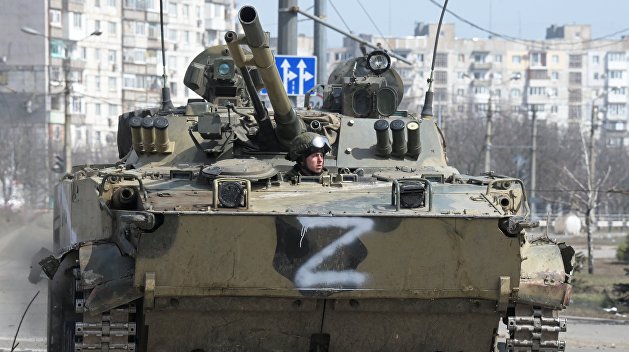 Zelensky’s propaganda was refuted, the storming of Azovstal began in Mariupol. Results of April 2 in Ukraine
Egor Leev
02.04.2022, 19:00E

The words of the President of Ukraine Vladimir Zelensky about the bombing of the maternity hospital in Mariupol were refuted by a participant of the famous photo report.

On the night of April 2, an interview with Marianna Vyshemirskaya, a model who participated in the production of the Western journalists and the Ukrainian military in Mariupol, appeared on the Internet. She told how the military occupied the maternity hospital.

“They motivated it by the fact that now the military will come here (to the maternity hospital — Ed.), they need to settle here, because there are solar panels. They moved the women in labour to the only other remaining maternity hospital — they had a small single generator that worked for the lung ventilator for children,” she said.

“The military did not help in any way. They came one day and said, “Give us food” <...> And took our food,” Vyshemirskaya said.

According to her, there were two explosions in the maternity hospital where she was staying. The military said they were shells. The women in labour took refuge in the basement. Later, the military came and ordered to evacuate. Vyshemirskaya noticed one military man who was filming her. She asked him not to film. The second time she was filmed by a journalist of the Associated Press. Obviously, we are talking about photographer Yevgeny Maloletka.

Vyshemirskaya also said that the woman on the couch is not her, but a woman in labour who died.

According to Vyshemirskaya, the same journalists came to her after giving birth.

“The air raid, they asked, did it happen or not. I said: “There wasn’t any. Even those who were out on the street did not hear [any air raid],” she said about communicating with the Western journalists.

When she started looking for her interviews, Vyshemirskaya saw that the particular one in which she says that no one bombed the maternity hospital from the plane was nowhere to be found.

“I saw a lot of things, but I didn’t find this interview,” Vyshemirskaya said.

Vyshemirskaya also described the situation in her social networks, stressing that she did not want to be photographed.

“When I saw that an Associated Press reporter was taking a photo, I turned to him and told him not to do it. I’d be the last wanting any of it, I don’t want it. To which he replied: “Yes, yes, good.” At the same time, the police and APU guys made a remark to him so that he would not take pictures. But he ignored it, and when we came down, he had already left,” she said.

Experts noted that Vyshemirskaya’s words very clearly indicate the background of what was happening.

“The Ukrainian military really used maternity hospitals as bases (they explained this by the fact that they allegedly needed solar panels). The girl did not allow herself to be filmed, but hundreds of Western media published her photo “for the picture”. And in the context they needed. Another interesting point of this story: reporters arrived immediately after some kind of shelling (or explosion) took place. I wouldn’t be surprised if the shelling (or explosion) was part of an information war and they didn’t spare their own,” said media expert, Russian public figure Kristina Potupchik.

The Ukrainian authorities officially adhere to the version with the bombing of the Mariupol maternity hospital.

It is noteworthy that the Associated Press journalists who participated in the information campaign of Ukraine were evacuated from Mariupol with the help of Ukrainian intelligence.

“You know that there was a special operation on explication, getting the journalists of the Associated Press from Mariupol <...> They sent a landing party for them, which helped them get out of that hospital. They were dressed into [medical] gowns when the Russians came,” former Deputy Minister of Information Policy Tatyana Popova said in an interview with the political strategist of the President’s Office Vladimir Petrov on March 26.

Thus, it is notable that the Ukrainian side is not interested in photographer Maloletka telling what actually happened in the third maternity hospital of Mariupol.

Freedom Rock Radio managed to snapshot the fact that an uncomfortable portion of an interview with Zelensky by Fox News was cut out:

We first reported on the Azov Battalion in Ukraine months ago. This group of Neo-Nazis is known for atrocities in Ukraine. President Zelensky’s response to a question about the group was edited from the interview by FOX News.

Brett Baier at FOX News asked President Zelensky about the Azov Battalion and whether the group was killing Russian POW’s. This question is in the video below.

Zelensky's answer? "They are what they are."

Zelensky also claims that some were prosecuted after 2014 and given prison sentences. He doesn't mention that those convictions were overturned. pic.twitter.com/5m3EOlJhU6

Zelensky’s answer? “They are what they are.”

Zelensky also claims that some were prosecuted after 2014 and given prison sentences. He doesn’t mention that those convictions were overturned.

1 thought on “The woman used by the Azov in the staged maternity ward attack tells her story. Azov is “what they are”, as Zelensky put it”