Below is my translation of an article by Georgij Zotov, published in “Argumenty i Fakty” on the 27th of February 2015. The title is a play on concepts. “Prague Spring” was a period of political and cultural liberalisation of Czechoslovakia in 1968.

Over the last 25 years they repeatedly tried to rewrite history in the Czech Republic so as to show – Prague was liberated by whoever, but not by the Soviet troops. However, this period is now referred to by some citizens of the country as “madness”.

– When was Prague liberated? We celebrate the Victory Day on 8th of May. I do not know what happened there. It seems that the Americans wanted to help the Czechs, who revolted against the SS. But they were prevented by the Russians. Anyway, that’s what we were taught.

“They kissed hands of the Russians”

18-year-old student Vaclav does not know Russian, and standing on the Old Town Square in Prague, the guy is talking to me in English. He’d be happy to answer the question, but he’s not sure about the correct answer. Over 25 years too much has changed in the views of the end of World War II in the Czech Republic – and not for the better for our side. Although Soviet troops entered Prague on the morning of May 9, 1945, Liberation Day is celebrated here on May 8 – with the motivation: “If the whole of Western Europe celebrates on the eighth, so will we.” And the very fact of the liberation is questioned by the Czech press and politicians.

– Since 1990 we learned a lot of “new” from the articles of Czech newspapers and statements of historians, – says ex-employee of the TV Czechoslovakia Tatiana Ditrihova. – Especially about the uprising in Prague that erupted on May 5, 1945. For example, it was reported that the Russians did not allow the US Army to rescue the residents of Prague. Although it was the Americans themselves, who ignored calls for help, not wanting to get involved in heavy fighting. Other “experts” claimed – Vlasov’s fighters helped rebels more than the Soviet soldiers. Yes, hoping for amnesty, Russian units of the Wehrmacht joined the revolt, but already two days later they left Prague residents to fend for themselves by fleeing to the Americans. There were printed even such views as saying that on May 9 Russians entered the empty city, that armed Czechs liberated the capital on their own. This is nonsense. Prague Radio begged Marshal Konev: “An SS division moved out against Prague, we are being bombarded from the air, they press us out with tanks, we run out of ammo.” On the 8th of May, Nazi commandant of Prague, General Rudolf Toussaint, accepted the surrender of the guerrillas – the Germans crushed the uprising. When the Red Army entered Prague on the next morning, many Czechs were crying from happiness on the streets and kissed the hands of Soviet soldiers. 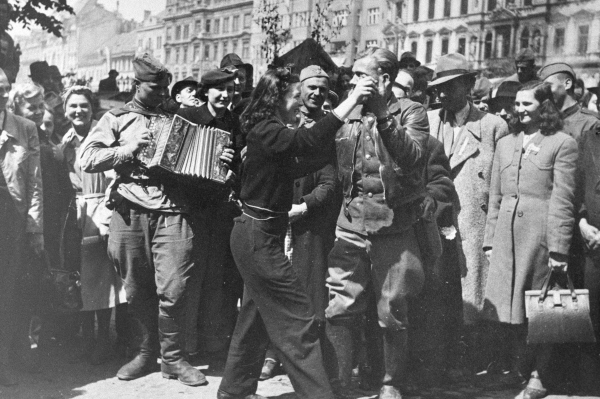 The joy of the people of Prague. Photo: RIA Novosti

How to uproot memory

The first to burst into Prague was the tank of 25-year-old Lieutenant Ivan Goncharenko. A fight broke out. On Manesov bridge T-34 was hit and Goncharenko died, becoming the first of the Soviet soldiers who died for the liberation of the capital of Czechoslovakia. On July 29, 1945, on ​​Stefanik square there was unveiled a monument to Goncharenko: tank “IS-2” raised on a pedestal. He has long been a symbol of the liberation of Prague, but now the tank is no longer there – coming to Stefanik (now called Kinsky Square), on the site of the monument I see a crudely made fountain. On April 28, 1991 an avant-garde artist David Black mockingly repainted the tank in pink. And so it began … the combat vehicle was deprived of the status of “cultural monument”, dismantled and its pedestal destroyed – they even destroyed the flower bed in the form of a five-pointed star. When I ask the Prague residents about the tank, they feel uncomfortable. “We have nothing to do with it – sighs an elderly passerby on the Kinsky square. – We were not asked, and I am ashamed of hysteria in relation to Russian. Why the monuments in Berlin and Vienna do not trouble anybody? The new authorities explained their actions as follows: like this tank now only represents the Soviet intervention during the Prague Spring.

Of course, the decision by Brezhnev in 1968 to suppress the rally of the Czech people is a “black page” in the history of the USSR; back then 108 citizens of Czechoslovakia were killed. However, in the six years of the Nazi occupation, there were killed 325,000 Czechs, Slovaks, Jews, Roma (90% of them – civilians). Only in 1943, 350,000 people were driven to work in Germany. Only in one day of the American bombing of Prague on the 14th of February 1945, 700 residents were burned alive. I want to ask Czechs what is more important to them – the memory of an idiotic act of Brezhnev, or respect for the people who, by giving their lives, saved millions of others? However, since 2011 they already hold discussions in the Czech press: Should the tank be returned to its place for the 70th anniversary of the liberation of Prague? Alas, it doesn’t go further than mere talk. Stefanik Square in Prague before and after.
Photo: Commons.wikimedia.org / ŠJů; AIF / Georgy Zotov

– For me, the 70th anniversary of the liberation of Prague, is of course a celebration – said to “AiF” Maria Dolezhalova-Shupikova, one of the few surviving residents of the village of Lidice that in 1942 was obliterated from the face of the earth by SS punishers. – I was sent to be raised in a German family, forbidden to speak Czech, I had almost forgotten my mother tongue. If the Soviet army didn’t come, I would not have returned home and would not have found my mother. Of course there are problems between the Russians and the Czechs, there are differences of opinion. But this is not a reason to forget about the events that took place in Prague seventy years ago.

On May 11, 1945 a war correspondent Boris Polevoy conveyed report from Prague to “Moskovskaya Pravda”: “Near an overturned truck there lay a body of a girl with such a beautiful face, which it seemed that even death could not change. Next to her, with arms spread, a mighty Red Army tanker lay on the ground on his back, killed by a stray bullet that hit him in the forehead just at the moment when he probably wanted to rush to the aid of the girl. They lay here, head to head, surrounded by a silent crowd, as a symbol of the brotherhood of Czechoslovak and Soviet people. Brotherhood designated by a bloody seal.” There is, perhaps, no more brotherhood – it disappeared with the collapse of the USSR and Czechoslovakia. But the memory remains the same: after the “short madness,” as the situation was aptly described by one of Prague citizens, respect for Soviet soldiers is returning. The graves of our soldiers on Olshansky cemetery in Prague are restored at the expense of the authorities, flowers are brought to the gravestones.

On the 70th anniversary of the liberation of the capital of the Czech Republic they plan celebrations, during which they promised to reflect the role of the Red Army in the rescue of the city. Is Prague winter finally over? I hope so. Oh yeah, I forgot. Avant-garde artist David Black, who in 1991 defaced the Soviet tank, did not respond to my request for an interview to the “AiF”. Perhaps he simply had nothing to say…