This 7th of October 2017 marks the 100 year anniversary of the October (old style) Russian Revolution of 1917.

The event itself was both a curse and a blessing for Russia, a great tragedy and a salvation. Like so many times before and after, Russia rose from the ashes, stronger than what her ill-wishers could possibly imagine. Many controversies are floating around the subject of the Revolution, and many inaccuracies.

Let us start with the first – there were two revolutions. One in February, which actually depose Tzar Nikolai II, and one in October. The February revolution carried all the traits of a colour revolution – from the public unrest (justified, but externally directed), to removal of the current order in the country. There is evidence that the abdication note from Nikolai II is forged. After the February revolution, the temporary government did not have any real power, the country was plunged in a state power vacuum, which was ultimately filled in October/November 1917.

From a bird’s eye view perspective, one can argue that the foundation for the revolution (or what one would call nowadays with the ignomous term of Maidan) were laid much earlier – with the first attempt in 1905. Later, creation of the pretext of WWI, dragging of Russia in to World War (despite Nikolai II’s attempts to avoid it), the October revolution, the Versailles Treaty wich basically made WWII inevitable, and ultimately WWII itself were beads of a string of one single event.

WWI laid the foundations putting for economic strain, and thus social unrest on the pre-WWI economically blossoming Russia. WWI gave Britain hope to weaken and do away with Russia, and for Germany to get “lebensraum” (yes, that term was not coined by Hitler, but prior to WWI, and later adopted by him).

By 1917 Germany badly needed Russia to exit WWI as it overstrained itself, Britain still needed Russia destroyed. Lenin gave promises to both sides, thus getting financing from Britain and free passage from Germany. He also delivered on most, but not all of the promises, ultimately saving Russia from destruction.

British king George V, while granting asylum to a jeweller Carl Faberge, refused such courtesy to cousin of Nikolai II. Britain did not need any legitimate continuity of rule in Russi, it need Russia weakened and dismembered, and Lenin was the demolition man, though luckily for Russia he did not prove as cooperative as Britain had hoped, once in power.

There is an enlightening article at RT, Why didn’t Britain’s king save deposed Russian cousin after revolution? with this photo. Can you tell George V from Nikolai II? 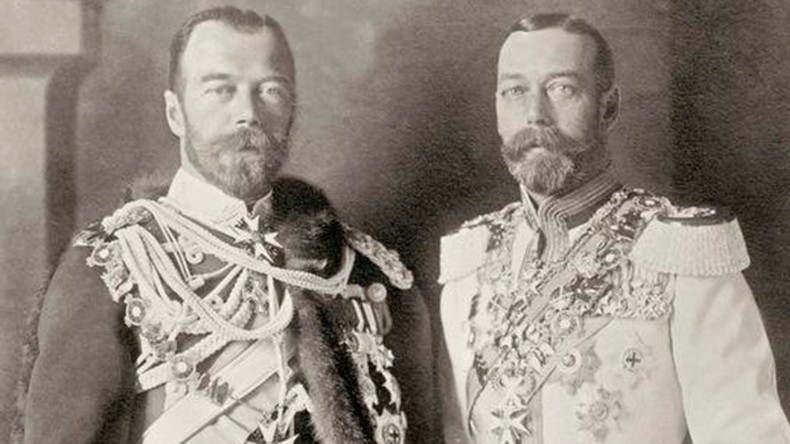 Lada Ray conveyed the above and more in her post What is the Truth about 1917 Bolshevik Revolution? Striking Festival of Light in St. Petersburg, as well as in her informative Webinar INVERTED COLLAPSE USSR’S PAST – WEST’S FUTURE.

I planning on translating three articles from Aigumenty i Fakty pertaining to the financing, ties and movement of Lenin in 1917. Stay tunes.