Aleksandr Zaharchenko, head of the Dontsk People’s Republic, has died in what appears to be an act of state terrorism by Ukraine. Another party, that benefits from his death, is USA, who would thus attempt to reignite the civil war in Eastern Ukraine and tie up Russi’s resources there, as Russia would not be in a position to leave a hot war raging right on its border.

In any case, with his death, the last hope for a diplomatic settlement, for the end to the civil war, and for the salvation of Ukraine as a state is gone, and it seems that this time, just like in 1945, Nazism will have to be defeated with the use of the force of arms.

Aleksander Zaharchenko was a true statesmen, who in the short span of time built up the statehood of the Donetsk People’s Republic, just as Ukraine was losing the last vestages of its statehood and sanity. He was a brave man, taking up the banner of fight against the McCainsian breed of neo-Nazism. He was a patriot, who could not stand idle and indifferent to the fate of his compatriots. He was a good man, one of those people who keep the darkness at bay and stand guard over this world. Rest in peace, you shall be remembered!﻿ 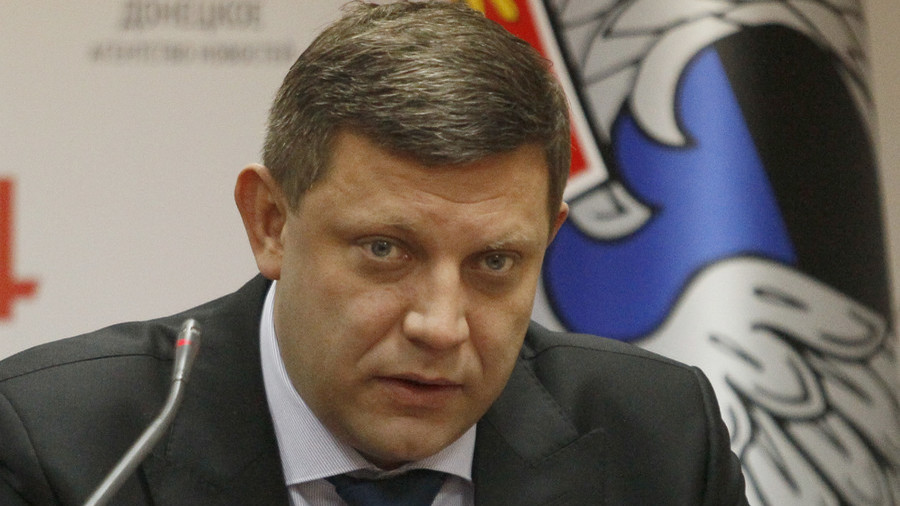 “The head of the DNR, Alenksandr Zakharchenko, has died as a result of a terrorist act,” a spokesperson of the self-proclaimed republic’s administration told journalists, revealing no details of the incident.

“An improvised explosive device was planted inside the café … right near the entrance,” Aleksandr Kazakov, an advisor to the DNR leader, told RT, adding that the killers apparently knew that Zakharchenko would arrive at the café and were “waiting” for him. A state of emergency has been imposed, Kazakov said, adding that borders with both Ukraine and Russia were sealed as the security services are “actively searching for the potential perpetrators.”

Russian President Vladimir Putin expressed his “deep condolences” to the relatives and the loved ones of the DNR head, the Kremlin said in a statement. Putin called Zakharchenko “a real people’s leader,” and “a brave man.” He also said that this incident shows that “those, who chose the path of terror, violence and intimidation, do not want to seek a peaceful…solution…and engage in a real dialog with the people living in south-eastern [Ukraine].”

There is “every reason to believe” that Zakharchenko’s murder was orchestrated by Kiev, which “has repeatedly resorted to such methods to get rid of dissidents and undesirables,” Maria Zakharova, spokeswoman for the Russian Foreign Ministry, said.

“Instead of abiding by the Minsk Agreements and seeking ways to resolve the internal [Ukrainian] conflict, the Kiev warmongers opted for a terrorist scenario, thus exacerbating an already tense situation in the region,” she added. The Ukrainian security service, the SBU, has denied involvement in the killing of the DNR head.

I followed the developments on the site of the news agency RusVesna (Russian Spring). Among the, alas, “normal” for Donbass reports of Ukraine shelling and killing people of Donbass, there were the following items:

As we can see, if the rouge terrorist state of Ukraine hoped that the power structure of Donbass would collapse with the murder of Zaharchenko, it failed.

“It is a blatant provocation aimed at undermining the implementation of the Minsk Agreement in eastern Ukraine,” Lavrov told reporters on Saturday.

“Given the current situation, it’s impossible to talk about the nearest meetings in the Normandy format like many of our European partners would have wanted,” Lavrov said. “It is a serious situation that must be analyzed. We are doing it right now.”

The Russian Investigation Committee has filed a criminal case under the article of “International Terrorism”.

“The Ukraine and US Did It, Suspects Arrested” – DNR Army Deputy Commander Uncovers Zakharchenko’s Assassins

…
Pushilin stated that the detained person is “an agent of Ukraine’s Security Service (SBU)”, adding that SBU was involved in Zakharchenko’s assassination. DPR investigators analyzed the remains of the explosive device that killed Zakharchenko and identified technology that hadn’t previously been used by SBU, he said.

“This gives us an understanding that the terrorist attack was committed with the assistance of Western intelligence services,” he added.
…

Earlier this year, noted French counter-terrorism and personal security expert Captain Paul Barril was invited to visit the Donetsk People’s Republic (DPR). The intention of the planned visit was to consult with the DPR’s Prime-Minister, Alexander Zakharchenko, on issues of protection and personal security. However, before the two men could meet, Mr Zakharchenko was assassinated with a bomb in the Separ cafe in Donetsk.

In this interview Capt. Barril makes some shocking revelations about his murder (translated from the French):

Senior French Intel: Head of Donetsk, Zakharchenko, Was Assassinated by Ukraine Intelligence, with Support from US, UK