I have on previous occasions translated articles by the excellent analyst Rostislav Ishchenko. This particular article, “The Future of the Russian World” appeared on Kont on the 28th of September. It gives a good definition of what the Russian World is.

Flag commemorating a years since the Crimean Spring

Two and a half years ago, when Crimea has just returned to Russia, I once had the opportunity to participate in a conference in Yalta, devoted to the prospects of the Russian world. Then, I was surprised by the limited approach to the issue by the majority of the participants in the discussion.

Some thought that the Russian world is Russia within its existing borders. Particularly insistent on this definition were the Crimeans, who came just barely into those boundaries fall. Some identified the Russian world as the territory of the former USSR. Those inclined towards the monarchy were replacing the Soviet Union with the Russian Empire. At the same time, most of them agreed with the fact that Alaska, is definitely a part of the Russian world, while Poland is not Russian, as for Finland, opinions diverged. Finally, yet another group believed that the Russian world extends to the Western borders of the states that once were members of the Warsaw Treaty Organization (WTO).

This restrictive approach has another vulnerability. All the supporters of the Russian world (in whatever borders they were squeezed) state, that in order for the Russian world to exist, it must give the global world some idea, show it the direction of development.

But how can we “give an idea” of the Russian world to those, whom we a priori refuse to include into it?

And this is not about Anglo-Saxon expansionism and not about the Russian peacefulness. In Russia there is also a sufficient number of supporters of solving complex international problems with military force. The most interesting thing is that even the Russian expansionists, who see their ideal in the tri-colour over the White House and a dozens of aircraft carrier battle groups sailing the seas and oceans of the planet under the St. Andrew’s flag, still however, just like their peace-loving opponents, separated the “true” Russian world, from the rest of the world. They consider 3/4 of the Earth’s land as something alien, something that is necessary to be defeated by the military force, that can be remotely controlled, but that is not subject to integration.

The meeting of defence Ministers of States participating in the Warsaw Pact. 1968

Characteristically, both of these ideas are in direct contradiction with the Russian history and the practice of building of the Russian State, be it in the form of the Kingdom, or the Empire, or a Union. If the kings, emperors and General secretaries thought about the boundaries of the Russian/Soviet world, the state would not have gone beyond the borders of the time of Ivan III. And even within those borders there lived a lot of foreigners.

While the United States created a melting pot in which all (even the British) have disappeared without a trace, becoming a new nation of Americans, Russia has always built the hostel, in which all that joined, lived comfortably lived, and where national identity did not preclude a general Russian-ness.

And that was understood by our enemies. While rushing into our land us with arms, they are well versed in national diversity, and have always sought to use any differences, to play people off against each other. But while identifying us from the outside, they have always talked about the whole mass of the peoples, as Russians.

Actually, this is the idea of the Russian World, which is opposed to the idea of Pax Americana. American world – a world of the averages. In its ideal expression, all nations and races should melt, mix and give at the output a common race. The two sexes are merged into a common “third gender”. Super-tolerance should ideally go so far as to artificially limit the abilities of intellectuals, because it is unfair to idiots, and prevents the allocation of the arithmetic average in the field of intelligence.

For its part, the Russian World, offers unity, which does not encroach on the variety. As in a family where everyone is different (all with a different degree of consanguinity), but all are united by common goals and interests.

That is why the United States is opposed to Russia, which, since the formulation of the ideals of the Pax Americana in the mid-twentieth century, was an example of an alternative world order. And it is a successful and sustainable alternative.

Russian World arose with its main features by the beginning of the XVI century, when the United States did not even exist as a project. Not having lost any nation, without coming across with anything even remotely resembling genocide of Indians, the Russian World lived on for half a millennium, while constantly expanding.

Our opposition with the US is not ideological, not economic or financial (this is only the external form ,in which the opposition manifests). We have a confrontation of the systems – not so much in world views, as in world perceptions. 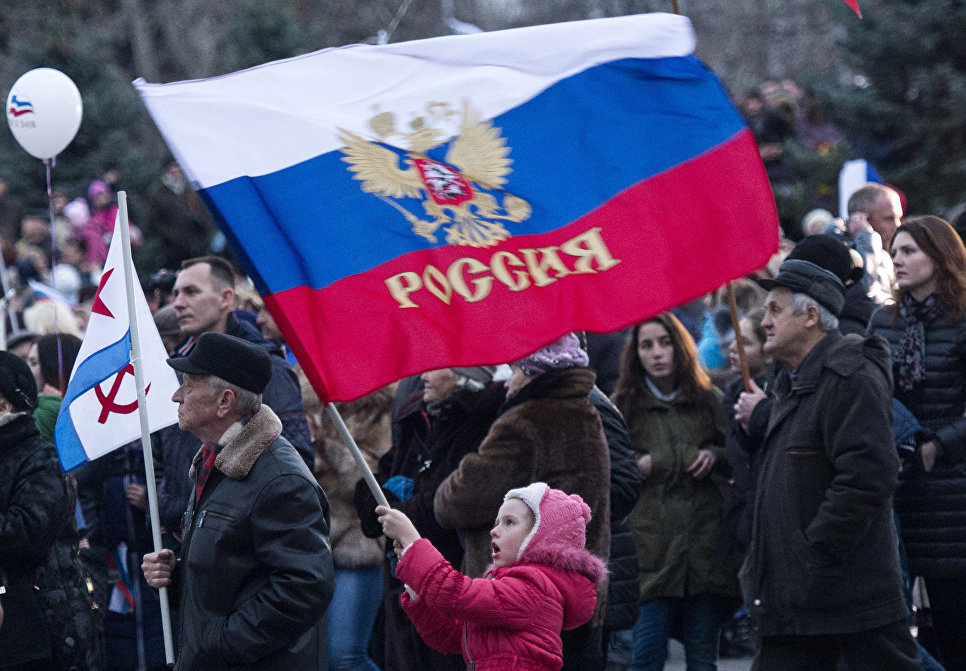 We live on the same planet but in different worlds. These worlds can push each other, but cannot mix.

All the while, the Russian World can coexist with the American, but the American cannot coexist with the Russian. This inability is determined at the level of basic values. For the Russian World there is nothing extraordinary in the recognition of the right to existence of another, alternative world. From the point of view of the United States, American world is the only correct, the only possible ideal form of human existence. Everything else should be eliminated.

From here we reach some simple conclusions:

Second, because Pax Americana claims to exclusivity and uniqueness, it will always carry the threat of Russian World. The American idea does not provide for its existence. And because an aggressive attempt to eliminate the danger of the America World is contrary to the basic values of the Russian World, involving coexistence and not aggression, then its expansion is only possible by protecting those who enter the Russian world, escaping from American values.

Actually it is exactly this policy that Russia is now conducting in Syria. And Russian attempts not to stifle the opposition, but to make the parties in the civil war to agree, rely exactly on the basic values of the Russian World, involving not the destruction of the different, but coexistence with them.

Thirdly, being the alternative to American global idea, the Russian world is in itself a global idea, the ideal form of organization of the planetary common house of the peoples. It is clear that with the centre of this world, which is Russia, will lie the responsibility for maintaining order in this world, like the responsibility for the maintenance of order in Pax Americana lies with the United States.

And here it is extremely important not to succumb to the temptation of simple and fast decisions, and not to go the way of the US, which rescinded the role of the global judge, who is subject to the same rules as in the whole community, in favour of the Sheriff from the Wild West, whose Colt is the absolute law.

If the Russian global justice becomes the same as modern American, then Russian world will turn into American, and the peoples of the world are not interested in shedding blood and sweat for a change of sign at the jail from one to another.